Probably 2022 was waiting for iPhone’s big leap towards innovation, and Apple didn’t disappoint. Apple has brought big changes to the iPhone 14 series. Making distinctive than the past iPhones.

It’s a little hard to get excited about an iPhone that features last year’s design, last year’s screen, and last year’s CPU, but taken on its own – out of the substantial shadow of the new iPhone 14 Pro – Apple’s new iPhone 14 looks like a pretty darn good smartphone.

Even though the iPhone 14 looks a lot like the iPhone 13, there are numerous upgrades under the hood that promise to deliver an improved experience overall.

The phone’s two rear cameras – a 12MP wide and 12MP ultra-wide – have new sensors, and the 12MP TrueDepth camera gobbles up more light and can now autofocus. All the lenses are backed by Apple’s new Photonic Engine (“photonic” refers to the management of photons, or light particles – read more about it in our iPhone 14 camera explainer). In a practical sense, it’s a reordering of Apple’s imaging pipeline, which now applies the Deep Fusion neural engine image processing to uncompressed images (rather than compressed ones, as it did previously).

What you won’t find here is a 48MP sensor with quad-pixel binning or any kind of zoom. For those, you need to upgrade to the iPhone 14 Pro or iPhone 14 Pro Max.

There’s still the excellent Super Retina XDR OLED screen, but if you’re not a fan of that notch you may again want to go for the 14 Pro or Pro Max, which are rocking Apple’s nifty new Dynamic Island, along with an adaptive refresh rate and always-on display.

For all that hasn’t changed, there are some cool new (though hard-to-test) features, like crash detection; where the phone will know if you’re in a car crash and automatically alert emergency services and key contacts. In a similar vein, the iPhone 14 can now use satellite communications to contact emergency services. It’s an industry first, and it’s good to see that even Apple’s entry-level iPhone 14 got this new ability.

There are some other significant under-the-hood updates, specifically a new heat dissipation system that will help the phone manage temperatures better, and work more efficiently (this phone has better battery life than the iPhone 13). Apple also contends that this iPhone is easier to repair than previous models, as – among other things, the back glass can now be replaced without have to swap out the entire enclosure. 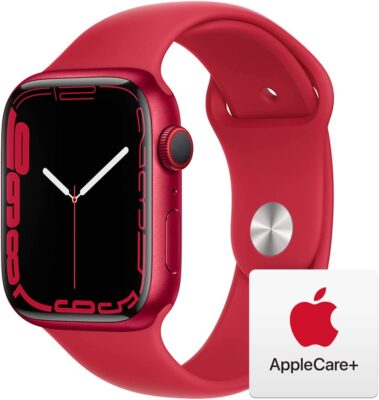 The Apple Watch has long been considered the gold standard of smartwatches, and that holds true with the Series 7. There isn’t much that separates it from the Series 6, but that’s not necessarily a drawback. The Series 6 already offered a polished software experience, sleek design and plenty of useful fitness features, and Apple has further refined those attributes with the Series 7.

It introduces a larger screen with a QWERTY keyboard for the first time, new color options, faster charging and improved durability for the same price as the Series 6. Of course, it’s not perfect — the battery life hasn’t improved, and Apple’s sleep tracking still generally lags behind the competition. But it’s undoubtedly the best smartwatch for iPhone owners, which is why we give it the best ranking.

While the enlarged screen is the Series 7’s most significant change, there are a few other update worth noting. The design is more durable and dust resistant for the first time, it can charge up to 33% faster than the Series 6 and the aluminum casing comes in new color options.

To put it bluntly, the Series 7 doesn’t feel like the type of generational upgrade we’ve come to expect from Apple’s smartwatches in years past. But that’s not necessarily a snub against it.

The Series 7 feels more like a refined version of a watch we already love — the Series 6 — rather than a major upgrade. And since it’s the same price as its predecessor, the Series 7 is a promising option for first-time Apple Watch buyers or those upgrading from an older watch.

If you have a Series 6 or a Series 5, don’t spend $400 on the Series 7. But if you have an aging model like the Series 3, Apple’s latest watch will feel like a noticeable leap forward.

The Bluetooth speaker market has changed quite a lot since JBL’s first Flip speaker entered the market a decade ago. From built-in smart assistants to room calibration, wi-fi, waterproofing and everything in between, the list of features that can be packed into a portable speaker has grown exponentially from when a speaker with a 3.5mm jack and a USB charging point was seen as “feature packed”.

While plenty have jumped on board this bandwagon to varying degrees of success, JBL’s Flip series has somewhat kept things simple. Now in its sixth generation, the JBL Flip 6 brings with it some carefully considered tweaks and additions, but that doesn’t take away from its dedication to powerful sound on the go.

Our quick take
There’s something quite admirable about the way the JBL Flip 6 goes about its business as a small portable speaker. It doesn’t aspire to more than it is, by including stacks of features that rarely get used in a product like this. Instead it focuses all of its efforts into getting good quality, powerful sound into a rugged speaker for on the go, and it absolutely succeeds.

Now in its sixth generation, it is continuing to evolve – both inside and out. For example, it now has IP67 certification for improved protection from the great outdoors, and packs a new tweeter that helps bring improved clarity and detail to its punchy, energetic performance. That comes with some downsides, and its newly ambitious high end can occasional sound harsh at top volume. However, considering this speaker can fill most rooms with toe-tapping sound with volume notches to spare, it’s easily avoided.

Overall, it’s a fantastic little speaker that belies its size and only builds further on the legacy of good speakers that came before it.

In this review, we will analyze a dietary supplement called Nature’s Bounty Melatonin. The manufacturer designed this product specifically for the promotion of relaxation and sleep. It claims to allow you to awaken refreshed and revitalized, especially during sleeplessness or jet lag. They have used Melatonin to help the onset of sleep as well as allowing one to stay asleep for a longer period of time. Keep on reading to see what Nature’s Bounty Melatonin can do for you as an effective jet lag product.

The manufacturer suggests that adults take 1 capsule of Nature’s Bounty Melatonin before bedtime, as it Melatonin may produce drowsiness. These instructions may leave users in doubt as it does not indicate if the capsule should be taken with or without a meal.

In order to purchase Nature’s Bounty Melatonin, one must follow the instructions on the manufacturer’s website to locate an online retail store such as Walgreens. Prices for a bottle of 60 capsules range between $10.74 and $16.79. Despite such a good price, the manufacturer does not offer discount or bulk purchases.

No side effects have been listed by the manufacturer, however, it is very important to take not of the warning signs when using a product that contains Melatonin. This substance may produce drowsiness, thus one should not drive, operate heavy machinery, or consume alcohol when using this product. One must also limit the use to two months with a break of one week.

After studying the manufacturer’s website and the label of the product, we were unable to find any evidence of a money-back guarantee. This is quite a concern, especially for first time users who wish to try the product and return it for a full refund if it does not deliver the results that it should. This also leads us to question the confidence the manufacturer has in the effectiveness of their product.

The customer reviews on the manufacturer’s website shows very positive and very negative feelings about the product. This is also seen on Amazon.

We have found a few things that we like about the dietary supplement Nature’s Bounty Melatonin. The product can be purchased from many different online retail stores of your choice.

However, we have also found many negative aspects about the product. First of all, the main active ingredient is Melatonin, a substance that should not be found in a jet lag product as it my just worsen the symptoms of jet lag. The product also lacks L-ornithine as well as a dual-action solution to the problem at hand. Furthermore, the manufacturer does not offer their clients with a return policy. These reasons lead us to believe that the product is ineffective and that the manufacturer themselves are not very confident in the results that it should deliver. We do not recommend Nature’s Bounty Melatonin.